I have ran into this issue several times and thought it would be worth sharing. The issue appears to be related Windows 2008 Server (the version without R2) and applies to both Standard and Enterprise editions.

When extending the disk, the partition appears to grow but the file system size does not change as expected. You’ll note in the screenshot below that the disk management screen (at the bottom) shows disk 1 – the D: drive – as being 40GB but the screenshot in the middle shows drive D: as only 30GB. 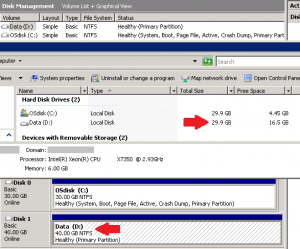 I found the following article that applies to Windows XP and 2003 server. The partition size is extended, but the file system remains the original size when you extend an NTFS volume http://support.microsoft.com/kb/832316

I didn’t install the mentioned hotfix as it does not apply to Windows 2008. However, the following diskpart commands resolved the issue:

After running the extend filesystem command the volume size is increased to 40GB without reboot or issue. I hope this article helps others who might run into this issue.

This entry was posted in Virtualization. Bookmark the permalink.

2 Responses to Weird issue with disk management in Windows 2008